My name is Rick and I live in Toronto, Ontario, Canada.  I hope I have something to offer if you are thinking about Stepping Back In Time and resurrecting some of the great traditions that we are losing in our busy world of today.
I’m not looking to start a hobby farm in my backyard with a substantial flock of chickens. I just keep 3 Isa Brown hens who supply around 20 eggs per week for my family’s consumption. I’m also not here to grind an axe, get up on a soap box or fly a flag for any environmental, animal cruelty or 100 mile diet. I simply want to raise a few hens so that I can eat their eggs. I like to think of them as pets that give you nourishment every day. Unfortunately, I can’t say the same about our dog, turtle, crayfish or deceased budgie or hamster. Don’t get me wrong….the dog earns his keep, but I’m not interested in eating what he leaves me to pick up. As for the others…..I never did see the purpose in getting these creatures, except to satisfy a momentary whim in my children’s’ brain development.
Is it a lot of work? The startup was challenging (but you have me for assistance) and the day-to-day is generally pretty easy. Oh… I forgot….If you are NOT a morning person….DON’T GET CHICKENS!!!!!!!!!!!!!!!!!!!!!!!!!!!!!!!!!!!!!! They NEED (not want) to get up early. If “early” is after 8am, than chickens are not for you. And… you CAN’T take a morning off unless you have a great neighbor like John, who looks after my hens if I don’t want to take them to the cottage for the weekend. So, with that said……. wouldn’t it be easier to just buy eggs from the grocery store. The short answer would be a resounding YES, considering that I don’t even do the grocery shopping in our home. But, the longer answer (it’s a bit complicated…bear with me) is No!
I think it’s fair to say that I am in the midst of a mid-life crisis. For the first time in many years, the kids don’t require the attention that they did in the past and I now have some time to discover or rediscover some interests. I don’t want a tattoo (though I could sure think of a few places I would like to see one on my wife), I don’t want a vintage car (sold my SWEEEEEET 1965 Mustang a few years ago and don’t miss it for a moment) and don’t want another woman because I love my wife and don’t want to give up half of what I have accumulated over the last few decades.

My wife & Honda at the cottage.

With that said, I found myself day dreaming about getting a few chicks last March. Looking back, I think it had something to do with the onset of spring combined with an early Easter. I mulled it over in my head for a week and then started to sneak around on the Internet to see if this was something that I could realistically pull off. Low and behold, it was not only possible, but lots of people were blogging, YOUTUBING or writing about it. Almost all that I watched or read came from the USA and in cities where it was LEGAL to raise hens. Unfortunately, I couldn’t find a lot of detailed content that took the guess-work out of so many questions that are unique to a flock of 2 or 3 hens and the potential difficulties that could arise with illegally raising hens in an urban setting.
To complicate matters further, I have no agricultural experience except for that 3 week stint on a farm where I bailed hay in that summer after grade 10. There weren’t even any chickens on that farm, just some cows and a bull. Incidentally, I guess I should explain why the “rural” stint only lasted 3 weeks. I feel there may be a credibility issue arising if I don’t share the whole story.
It turned out that Mr. Farmer thought of himself as a practical joker. One morning (my 15th day on the job…wait for it………….you’ll see the pattern) Mr. Farmer thought it would be amusing if I followed to his request and jumped into the coral to “fetch” a particular pail at the other end of the corral. Unbeknownst to me, “Mr. Stud Service” (the bull) was in the corner of THIS coral and he was mighty frustrated because certain cows in the adjacent coral were in season (that’s ovulating for you- I mean –us city folk). As I walked across the coral, Mr. Bull saw me as an outlet for his sexual frustration and proceeded to run me down. Luckily, I was close to the fence and managed to jump over the coral before Mr. Stud Service gored a 3” hole in my ass. To my amazement, Mr. Jokey Farmer thought that this “set-up” was hilarious. I didn’t find the humor in his little joke and then proceeded to tell Mr. Farmer to begin a derogatory contortionists move that was anatomically impossible. I followed this up with some off-colored language and terminated my farming career. I guess I wanted to share this with you so that you didn’t think I was a loser who could only last 3 weeks on a farm!
Anyways… a farmer I am not, though I did hear stories that it runs in my blood. It turns out my great-grandfather farmed some land around 70 years ago. I even heard that he had chickens as well. Unfortunately, he is long gone and obviously not a source for information. So……off I went into the WEB and discovered many peoples’ accounts of raising chickens. I even managed to speak to some people who raised chickens in rural areas. For the most part, they were polite, but there were a few eye brow raises and I think I heard a few of their inside voices laughing at the city boy who wanted to play farmer with a few hens in his backyard.
I became somewhat obsessed with learning about chicks and hens and then….JACKPOT………I discovered a garden center in Mississauga that sold day old chicks. I left work that day and headed straight to the garden center to have a look. Just looking……That’s all……Just looking!
I remember walking into the store. It was a sunny day and unseasonably mild for mid march. I glance around and took a look down a few isles. It was my ears that made the discovery! Somewhere near the back of the store, hundreds of faint peeps were calling out. I followed the sound until I came upon 2 brooders that were packed with tons of fluffy yellow chicks that were clambering over one another.

I’d like to think it was my rational side that prevented me from buying two of those chicks that day. Looking back, I can now admit that I was TOTALLY HOOKED the moment I saw those chicks and I was just postponing the inevitable day when I’d be walking out of that garden center with a few of my own chicks!
Later that night, and for several nights after, I kept mulling over the chicks. I kept going back and forth as I gathered more and more information. Why was I so drawn to these baby birds? I tried rationalizing my desire by telling myself that this would be a GREAT learning experience for the kids. They could begin to connect with a food source and take pride in the fact that they participated in the raising of that food source. And then………my daughter saw me looking at some chicks on the computer. ( OK… that didn’t sound right??????????????????) Anyways, we all know where this is going to end up!!!!!!!!!!!!!!!!!!!!!!! 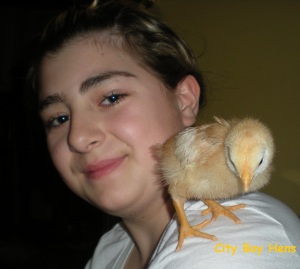 “Oh please Daddy. Please Daddy….Can we get some!!!!!!!!!!!!!! I promise we will take care of them”. Visions of a previous conversation came flooding back to that day when they begged for a puppy 9 long years ago. They promised to walk, feed and pick up the poop but like most other fathers, I’ve been doing these tasks for the last 8 years 11 months and counting.
Anyways, I’d like to think that I partially made my decision to get the chicks because this would be a positive learning experience for the kids. The REALITY is I would have gotten them with or without kids! As a side bar…here is an amusing story about the hens and my daughter. It kind of falls into the amusing category like ……..when my wife reminded me AFTER I got the chicks that our dog is a Labrador Retriever and genetically wired to flush out or retrieve birds.

“I can’t believe I have to share the backyard with these guys!”

Anyways, I’m going to fast forward 18 weeks later to that hot morning in July at the cottage when Honda laid her FIRST egg.
I carried that egg around like a proud Papa waiting for my family to wake up. When my daughter came out, I showed her Honda’s accomplishment and then proceeded to tell her that we can share the first egg together. My daughter……..the one who begged and pleaded for me to get the chicks ,who tenderly cuddled “her babies” in a blanket during every episode of American Idol last Spring, looked up at me in complete DISBELIEFE and exclaimed” I’m not eating that! Do you know where that came out of??????? Besides, these are OUR pets and I’m not eating something from our pets!!!!!!!!!!!!!” (I know the “Rural” folks are no longer laughing on the inside. I can hear you loud and clear!)
To this day, my daughter has not eaten an egg from our hens. In fact, she has not eaten an egg from any hen. Maybe if I threaten to give away “our pets” she will eat one of those eggs! Who am I kidding; I’m not giving away “my girls”.

So….If you are finally asking yourself why I am taking (and plan to take) all this time to write a blog about raising backyard hens…I’m really doing it for you….(OK…I’m also enjoying the process!) I have learned a lot along the way and I’d like to help take some of the guess-work out of your equation. I’m going to primarily stick with writing about “caring” for your hens. I’m not really too interested in giving you personal accounts about my chickens though I will share some details when I find that it is pertinent to the information that I am providing. There are enough blogs out there that go into incredible detail about the owner’s relationship with his/hers hens. I’m not really comfortable with that touchy feely kind of blog. I’d rather pass on as much information as I can to help you get started raising chickens in Toronto or some other urban metropolis where it is not considered legal.
If you already have hens and don’t know what you are doing, it’s fair to say that you may have put the cart before the horse (Not bad for a city boy –eh?) I’ll do what I can to get you back on track. If you are just thinking about getting started, I hope you’ll get some hens. It really is a blast. So…………..here goes!

My son & Honda at the cottage