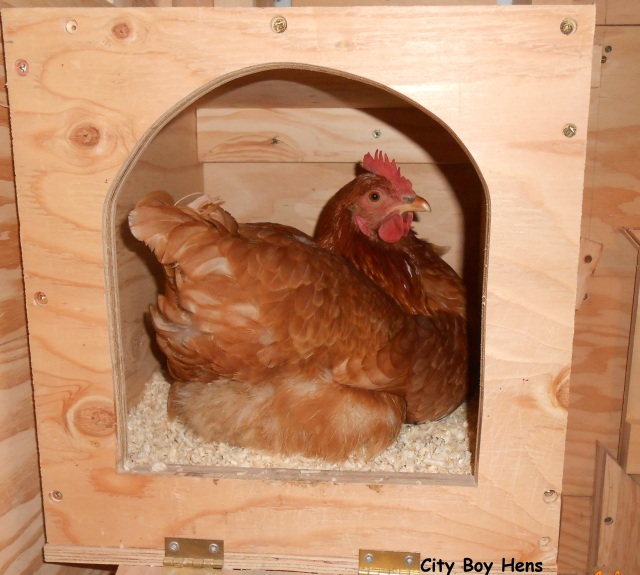 As I wrote in a previous post, I raised Honda & Swiffer from chicks back in mid-March 2012.  Knowing that they were sex-links, I was prepared to have FULL egg production (14 eggs/wk) by mid-July.  Without a word of a lie, Honda laid her first egg on the 18th day of July in the 18th week of her life.

I remember we were up at the cottage that week in July and the hens were residing in a portable “chicken ark” that I made. 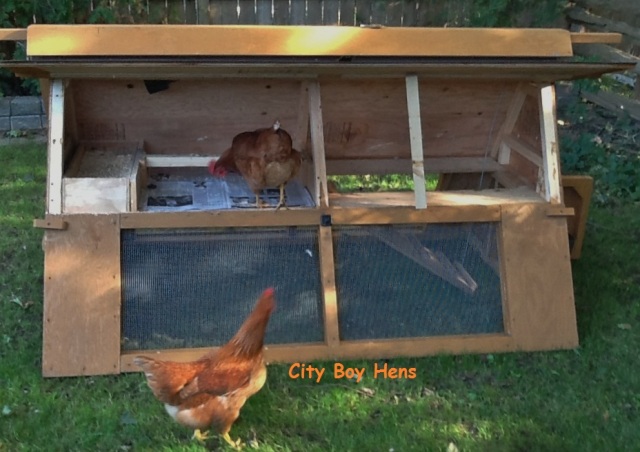 As I walked past the run, I noticed an “egg” shape that was nestled amongst some rocks beside the ark. “No…It couldn’t be” I thought.  I quickly opened the gate and went right towards the shape.  There, on the ground amidst those rocks, was the first offering from one of my hens.  At this point, I didn’t know who to congratulate and I was a bit concerned that the egg was not laid in the nest box.  I figured that the hens needed a bit of direction so I got a few plastic eggs (the ones that we use for our Easter egg hunt every year) from inside the cottage.  The only trouble was that these eggs were bright yellow, purple and green.  I think I chose yellow because I liked that color better than the rest and proceeded to put two “fakers” in the nest box.

The following morning I let the hens out into their run and then settled back to see who was the “egg layer”.   Shortly after, Honda went up into the Ark and disappeared for a ½ hour.  After her decent down the plank, I opened the hatch door and there, sandwiched between two plastic yellow eggs was a warm brown egg!

I’m not embarrassed to say that I was beaming with pride and congratulated Honda on her success.  I then glanced over at Swiffer and told her “Your turn”.  I guess my words of encouragement weren’t inspirational enough and Swiffer just continued to scratch & peck the ground. 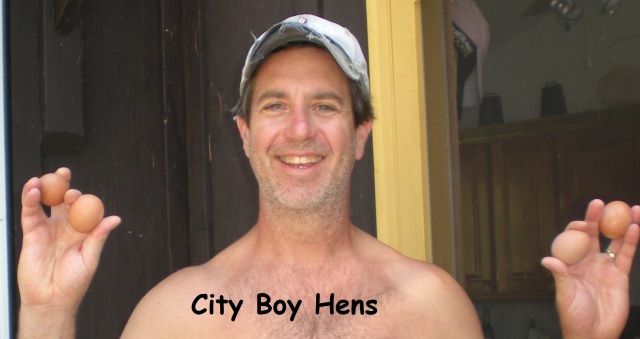 For the following week, my daily routine (some might say obsession) consisted of checking the nest box 5 or 6 times per day and ONLY collecting Honda’s “contribution” to the family table. The hens we now restricted to the run and no longer allowed unsupervised free ranging.  You see, I wanted to rule out the probability that Swiffer wasn’t laying her eggs in the bush when they were out roaming the property.

After 1 week of this routine, I was certain that Swiffer was NOT laying.  I couldn’t understand.  She was a sex-link hen and scheduled to begin laying between 18-20 weeks.   She also exhibited the signs of maturity which included bright red wattles and comb and did the “chicken squat” when I would go to pick her up. Incidentally, the chicken squat goes like this….the hen immediately squats, slightly spreads her wings and COMPLETELY freezes in position.  I’ve been told that this is what a hen does when a rooster spontaneously decides that it is time for a little action. There is no foreplay or a gentle request for a rendezvous behind the shed.  It’s more like jump on her back, grab her neck feathers with your beak so that you can hold on and….well…you get the picture. 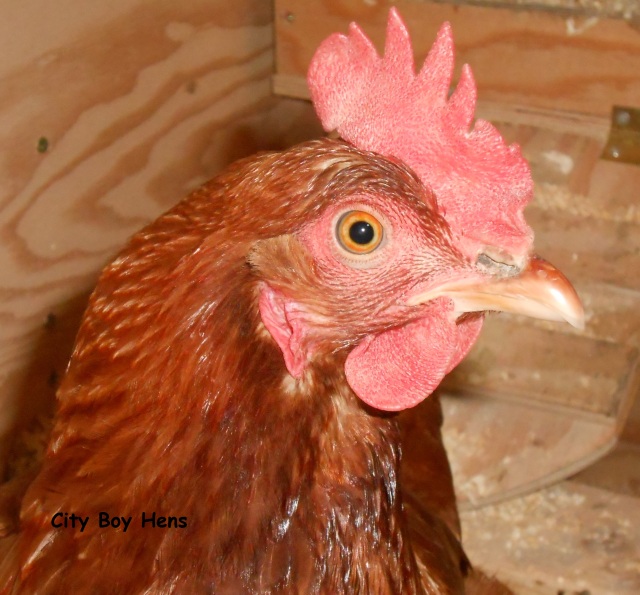 The other tell-tale sign that a pullet is ready for laying is that her vent is moist.  No….you don’t have to touch it!  Just have a look at it!  Besides, you need to get over this.  You should be looking at your hens’ vent on a regular basis because this is one of the obvious places for mites to lay their eggs. (More on this in a another post) 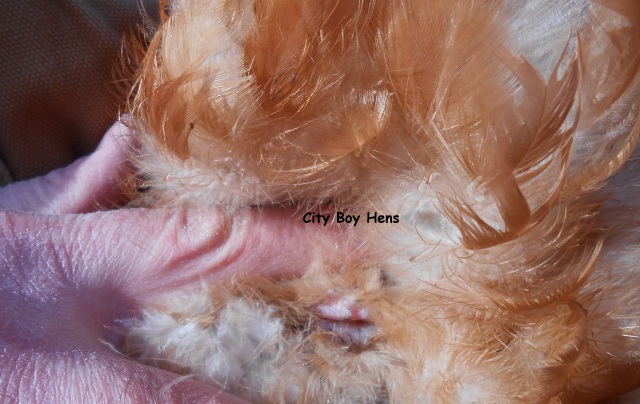 Anyway……, Swiffer exhibited the tell-tale signs of sexual maturity but still…no eggs.  This went on for the ENTIRE months of August and September.  Needless to say, my obsession became galactic.  I scoured the Internet looking for answers and found the same recurring threads which stated that a laying hen will probably NEVER lay an egg if she has NOT by 28 weeks of age.  I even contacted the hatchery where she was born and the owner told me that I got the 1 in 10,000 hen that WILL not lay. 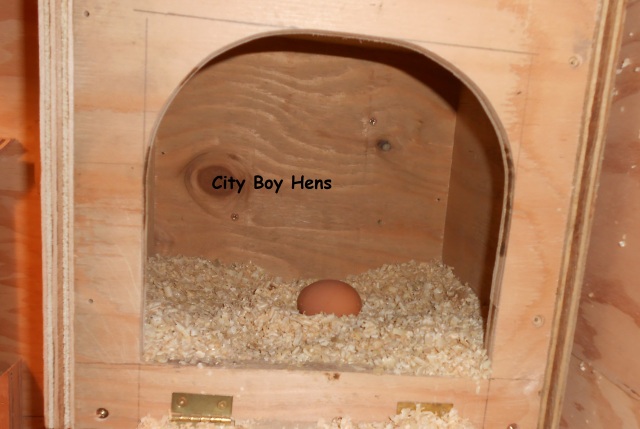 This ain’t gonna’ be enough!

As I said in an earlier post, I did not get hens for pets.  I raised them for egg production!  My wife still doesn’t believe me but it IS the egg that I am after.  Anyways……during the first week in October (week 30) I was making arrangements to replace Swiffer with another sex-link hen that was at point of lay.  My wife, who has this uncanny “psychic” ability, told me to wait until we returned from the cottage to celebrate Thanksgiving before I made any rash decisions.

I agreed that I would give Swiffer 1 MORE WEEK and then it was the end of her road at City Boy Hens!

I made an arrangement with John (the neighbour) to look after the hens while we went to the cottage for the Thanksgiving long weekend. Upon our return to the city, John came out to see me before I was even up the driveway with the van.  He told me that something was terribly wrong with the hens because there were 2 soft-shelled eggs laid that morning. John, not knowing that this happens quite often when a hens BEGINS production, thought that the hens were dying.  I smiled proudly, screamed out a silent “yes” and assured John that all was well.   It turns out that Swiffer decided to begin production at the end of WEEK 30…….12 weeks AFTER Honda began in July…….and 84 eggs BEHIND in the count! 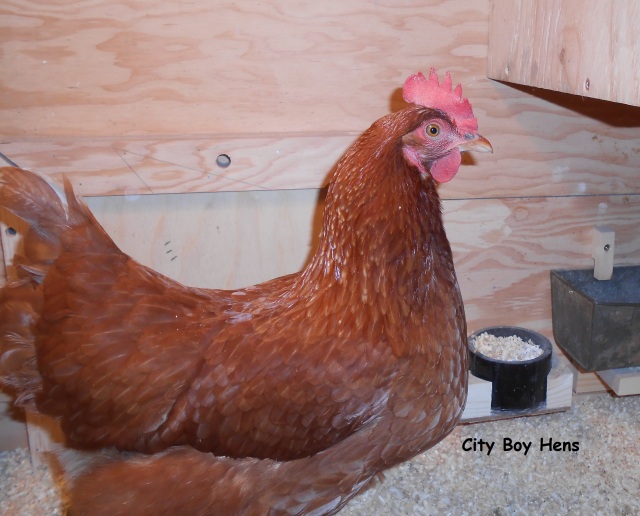 A very much ALIVE Swiffer!

I guess the point in telling you all of this is if I listened to the hatchery or followed through with the advice from the feed store or the Internet, I would have killed Swiffer and realized that I made a mistake when I cleaned her out.  During that process, I would have discovered tons of tiny yellow clusters which were her ovaries.  It’s those ovaries that turn into eggs.

I’m glad I listened to me wife and waited for our “slow learner” to mature……..So…I guess what I am trying to say is….. just chill.  I know it is easier said than done.  Do your part and ensure that your hens have adequate fresh water, a good layer feed and the other recommendations I have made in other posts.  The rest is up to them.  Good Luck!! 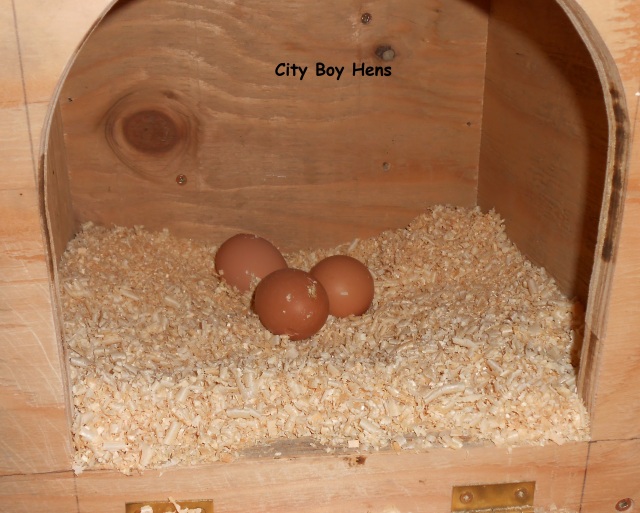 30 thoughts on “When Will My Hen Start Laying?”