The egg count has been a little low for the past  few weeks and guess who’s not putting forth a regular contribution to City Boy Hens.  If you guessed Swiffer.. then you are correct.  Now, I know there’s going to be a few of you out there who will be sure to defend Swiffer by asking how I know that it is she that is not laying.

Well…as any self-respecting chicken owner will attest, I can tell which hen lays each particular egg. It also helps that I only have 3 hens on my urban homestead.   At City Boy Hens, Honda lays a large egg that is slightly elongated.  Rosie’s contribution is gigantic (extra-large) and Swiffer lays an egg that is not too far off from the size of a Ping-Pong ball.  Okay…I may be exaggerating a bit, but it is definitely the SMALLEST egg each day! 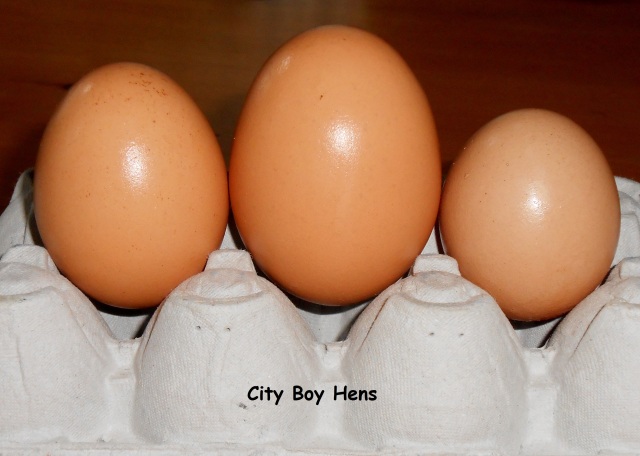 So.. in the last few weeks, some of the “smallest” eggs have been missing from the coop. Initially, I thought it was odd that Swiffer would be slowing down so soon, considering that she only began laying last October.  But then again, nothing that Swiffer does is too surprising because she has always been a bit of a strange chicken.

Anyways, this morning I went out to feed the hens and collect the eggs.  As I walked past the cedar hedge, something caught my eye.  There, nestled around some dried leaves was…..an egg….THE SIZE OF A PING PONG BALL!!!!!!   There was no second guessing.  This was Swiffer’s egg! 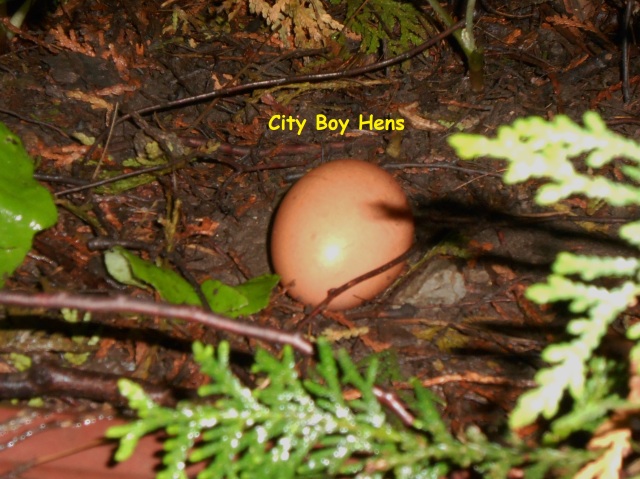 Well…Swiffer, you’ve managed to lower the bar AGAIN!!! Now….. you’ve taken it upon yourself to not even bother to lay your egg in the coop.  What’s the problem?  Are the “digs” not good enough for you?  Feel like your slummin’ it at City Boy Hens?

It’s bad enough that you won’t use the nest box, but now you’ve taken it upon yourself to just start dropping your eggs around the backyard where ever you see fit!  Ah…..Hello???? The backyard is not even that big.  I’ve seen how far you can run when I come out with some vegetable snacks.  Surely, you could waddle your lazy ass back over to the coop in order to deposit your egg.

Is this some kind of joke??????  Do you think I’m going to start a covert operation every day in order to find your egg?????  Is this some kind of Easter Egg prank????  It’s bad enough that you picked on Rosie for a month, that you took forever to actually start laying eggs and that you lay the SMALLEST EGG every day, but now you are going to hide them for me to find.  Let me tell you what’s coming down the pipe.  Look into the crystal ball.  Do you see a large soup pot with a fresh free-range chicken flavoring the broth?  No???????????……………..  LOOK CLOSER!!!!!!

In the mean time…all free-ranging for you will be strictly curtailed until one Ping-Pong sized egg appears in the coop each day.  No egg………no recreation time!  The decision is yours.  Man…I can’t believe you……….even after I wrote a great post about you last week!