Over the last few months, I’ve been thinking a lot about honey.  It all started with a bottle of honey that ended up in our house because my daughter wanted it on her morning pancakes.  I then began using it as a sweetener in my tea.  And then…..I started thinking.

As my wife will testify, thinking & me can become a dangerous obsessive combination which generally leads to something new.

Well…..I’m happy to report that this city boy is movin’ into the honey business.  It might be a bit premature, but I want to tell you how I got to this point.  The desire to make honey (well.. I’m not really makin’ it..the bees will) is no different from my desire to make lots of other foods from yesteryear.  Like all the other stuff, it has the right combination of interest, technique and loads of knowledge that fits right up my alley.

In my initial investigation, I thought that maybe I could co-op into one of the various hives that are maintained by a local honey bee association in our city.  That idea hit the skids when I found out that there is a long waiting list and I’d have to do a lot of volunteer hours for a little bit of honey.  Not to mention that the majority of those hours would have to be given in the summer when I want to be at the cottage.

At first, I thought that was the end of City Boy Honey, but then I started thinking in broader terms that could potentially fit into  my desire to harvest this golden nectar.  What about if I partnered with someone else like a local farmer who was willing to share the responsibilities with me?  Then I shot that one down when I realized that I’d have to leave my summer sanctuary in order to harvest the honey in late summer and I’d never get the chance to see how the bees were progressing through the summer.   Then…..I remembered Dan!

Dan is a local farmer near our cottage who sells antiques and boards horses.  I have known him for around 8 years and I have lovingly restored some of the pieces that I have bought from him over these years.  But best of all….DAN KEEPS BEES!!!!!

I called him about 3 seconds after I remembered this and asked him if he would be willing to share a hive with me.  I am delighted to say that Dan is also excited to join in this venture with me.  For him, it’s really an opportunity to share his knowledge with a Newby.  As I have said before, you meet great people in your discoveries who generally want to share their interests.

Well, off I went up to the cottage for the weekend and arranged to meet with Dan on Saturday.  This Spring is really late up North.  In fact, the ice just went out of our lake on Saturday.

As a result, Dan’s hives are still wrapped up from the Winter and it wasn’t until the sun came out that the bees began pouring out of one of the hives, which is ALWAYS a great sign after a long winter. 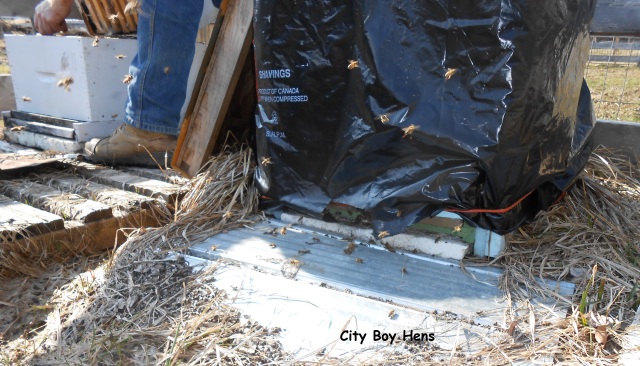 Unfortunately, 2 of the hives did not survive the Winter.  From what I have read, this seems to be the norm for this year.

As I close this post, I am sipping on a hot cup of tea that is sweetened with Dan’s honey.  If all goes well, I’ll be tasting some of my own honey by the end of August.  In the mean time, I’ll keep you up to date with what I am learning in the wonderful world of the apiary.